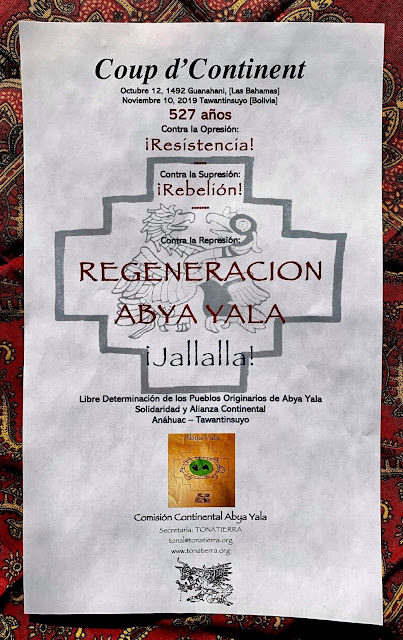 The coup d’Etat in Bolivia is an extrapolation and extenuation in today's time of the collapse of the neoliberal project across the planet of the Doctrine of Discovery of Christendom of 1492 and the continuation of 527 years of colonialism and genocide against Indigenous Peoples by the successor states to the doctrine in the Americas.


The coup in Bolivia is the last gasp of the Monroe Doctrine of 1823, the same year that the US Supreme Court under Chief Justice Marshall set the Doctrine of Discovery in the Johnson v. M’Intosh decision as fundamental to all property law in the US system of jurisprudence and jurisdiction. The Monroe Doctrine is the continental extrapolation of the Doctrine of Discovery of Christendom, now being re-invoked in the supranational neoliberal corporate context of the Divine Right of States: OAS Settler States [Americas].


Codified by the doctrine of the Divine Right of States, aka the Westphalian System of State Sovereignty (United Nations) the states of the Americas (OAS) have presented themselves to the international community as immune to the requirement under international law to rectify the Crime Against Humanity of colonialism as mandated in UN General Assembly Resolution 1514 ((1960): "All peoples have the right to self-determination."


Instead, continental settler state schema which is known in Latin America as the "Estado Criollo", lurches deeper into genocide via Bolsonaro in Brazil and Camacho in Bolivia, in alignment with the agenda of the Christian Evangelical leadership that directs the movement from the pulpits of public power that support Donald Trump in the north.


In this geopolitical schema, the electoral systems of the states, "democratic" or not, are marketing mechanisms, they represent the commodification of constituencies to be manipulated, managed, and eventually bought and sold in order to serve the interests of the cultural and economic elites that will use any means necessary to hold on to the reins of power derived from the continental Coup d'Continent of "White Supremacy"="Christian Domination" that began on October 12, 1492. 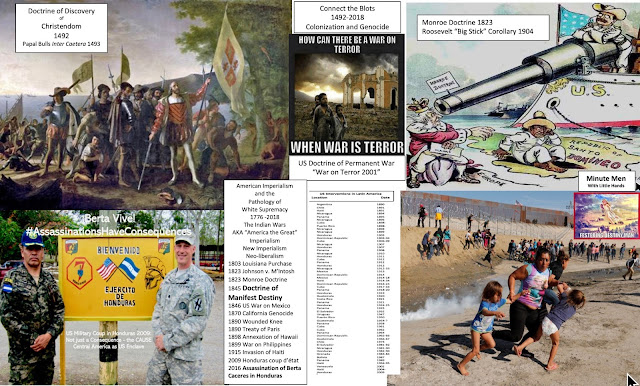 Posted by chantlaca at 7:10 AM