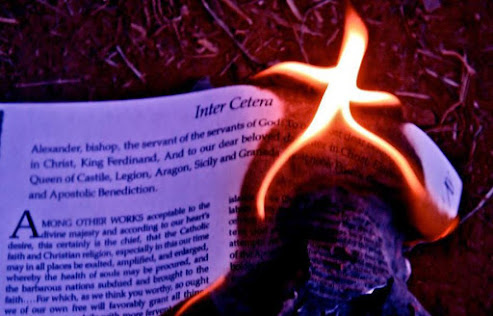 More and more cities are switching from Columbus Day to “Indigenous Peoples Day.” This trend is partly due to an increasing awareness of the fact that Columbus was a heinous figure in world history. For many, his name now evokes a bloody imagery of injustice, colonization, and destruction for the Original Nations of the hemisphere that lies across the Atlantic Ocean west of Europe.

Columbus is now being generally associated with a multi-century legacy of death, enslavement, genocide, and domination. As James A. Loewen states in Lies My Teacher Told Me (2005),

“The way American history books treat Columbus reinforces the tendency to not think about the process of domination.” (p. 35)

"The traditional picture of Columbus landing on the American shore shows him dominating immediately, and this is based on fact: Columbus claimed everything he saw right off the boat. When textbooks celebrate this process, they imply that taking the land and dominating the Indians was inevitable if not natural."

Changing “Columbus Day” to “Indigenous Peoples Day” makes it seem as if we are switching the focus away from that process of domination. But it is sensible to ask ourselves in what context is the term “indigenous” being used? I have a dictionary from the 1940’s that lists the word “indigenous” as meaning “something natural to a given place, native.” A particular variety of plant or an animal might be considered “indigenous” because it occurs naturally in that place and is not invasive. In that sense, Indigenous Peoples Day could be interpreted as meaning Natural Peoples Day or Original Peoples (Nations) Day. 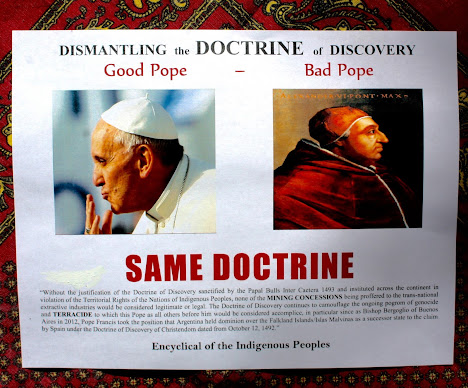 Sometimes what is left out of focus and not mentioned is more important than what is focused upon and made explicit. Certainly we want to focus on what it was like for nations and peoples when our ancestors were living their free existence before the dominating empires of Christendom reached this part of the planet. Think 1491. But we also have to talk about the oppression and abuse that our nations have been experiencing ever since the invasion that began in 1492, which is an existence lived under Christian European domination.

Decades of work in the United Nations system by nations and peoples that have experienced colonialism at the hands of “states” (of domination) has placed a global focus on the word “Indigenous” in the international arena. That work at the UN has not adequately focused attention on the background context of the international working definition of the word “indigenous.” Hardly any focus has been placed on the system of domination that was established by the States of Christendom on top of the original nations and peoples of this continent and this hemisphere located across the Atlantic Ocean, west of Europe, and in other parts of the globe such as the islands of Oceania, Australia, and Aoteroa (“New Zealand”).

Domination occurs and is maintained when a free nation or people is forced to exist beneath and subject to a dominating system established on top of them, when the people are made to live subject to a will external to their own. As will become clear below, when Original Nations get reduced from their original free and independent life to an existence lived under domination, they are called “indigenous.”

The term “conquest” is typically used as a cover-word to draw attention away from ongoing, persistent, and traumatic processes of domination, typically called “civilization.” The word conquest is used as a way of making domination seem acceptable. “Hey, we won, you lost, you’re conquered, now get over it!” Here’s my response to that flimsy logic: What you’re calling “conquest” is your claim of a right of domination, and we do not accept the argument that you have “the right” to claim a right of domination over nations and peoples that were existing free and independent before a system of domination was coercively imposed on them.

To be defined as “indigenous” in the context of the United Nations is to be defined as being “the descendants” of a People that had been living free in their original territory, when “persons of a different culture or ethnic origin arrived [invaded] there from other parts of the world.” The invading people then “overcame them, and by conquest settlement or other means,” and “reduced them to a non-dominant or colonial situation.” (Khan and Talal, Indigenous Peoples: A Global Quest for Justice (1987)). The opposite of non-dominant is dominant, which is simply another word for domination.

Eventually, after WWII the terms “colonial peoples” and “indigenous peoples” began to be used synonymously. After the 1960’s, the term “colonial peoples” was dropped in favor of Indigenous peoples. Here’s the point: Neither of those two phrases specifically names domination. As a result, the issue of Indigenous peoples being “peoples” that have been forced to live under and subject to a system of domination has not been identified as the primary problem needing to be solved. The international working definition of the term “indigenous” effectively hides the context of the domination system. 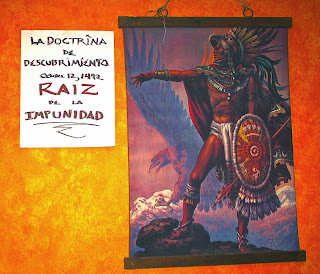 Those of us who trace our existence to Original Nations and Peoples are able to think back to the pre-invasion existence of our ancestors. That was when our ancestors were still living free and independent of the colonial powers from Western Christendom. The international working definition of the term “indigenous” gives the barest acknowledgment to the original free existence of our ancestors. But it then immediately moves away from that free existence by placing “Indigenous peoples” in a context of domination by means of a contrast between those who are considered “dominant” (i.e., the dominating society of the state”) and those peoples considered “non-dominant.”

The international working definition of the term “Indigenous” presumes that the right of our nations and peoples to live free and independent of domination was ended as soon as the domination system from Western Europe began its dominating (“civilizing”) process of violently and semantically subjecting our original nations to the words, metaphors, meanings, and behaviors of Western Christendom and successor states of domination. The mission of Christendom was to use brutal processes to work toward the genocidal uprooting and dissolution (elimination) of our free nations.

So, let’s suppose there is a successful campaign to change “Columbus Day” to “Indigenous Peoples Day” but the ongoing system of domination is not made a focus of that campaign. Suppose the domination system does not get addressed as the problem that needs to be rectified and ended. The day after “Columbus Day” has been changed to “Indigenous Peoples Day” it will seem as if some significant shift has occurred, when, in fact, the underlying system of domination will not have been touched or even brought into focus.

We have the mentally difficult task of interpreting the colonizers’ words, texts, and metaphors in order to reveal deeper truths. Here’s a concluding point I wish to make, “Original Nations Day” is preferable to “Indigenous Peoples Day.” We could use “Original Nations Day” as a point of contrast to the domination system which is still being used against us, while making the argument there is no such thing as a right of domination. In other words, our nations still have the inherent right to exist free and independent of domination and dehumanization. This would be a step toward the explicitly stated goal of bringing an end to the claim of a right of domination and the resulting system of domination. 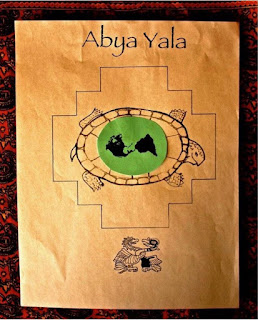 Steven Newcomb (Shawnee, Lenape) is co-founder and co-director of the Indigenous Law Institute, and author of Pagans in the Promised Land: Decoding the Doctrine of Christian Discovery (Fulcrum, 2008). Pagans is the basis for the documentary movie, The Doctrine of Discovery: Unmasking the Domination Code, directed and produced by Sheldon Wolfchild (Dakota), with narration by Buffy Sainte-Marie (Cree).

UN Preliminary Study on the Doctrine of Discovery